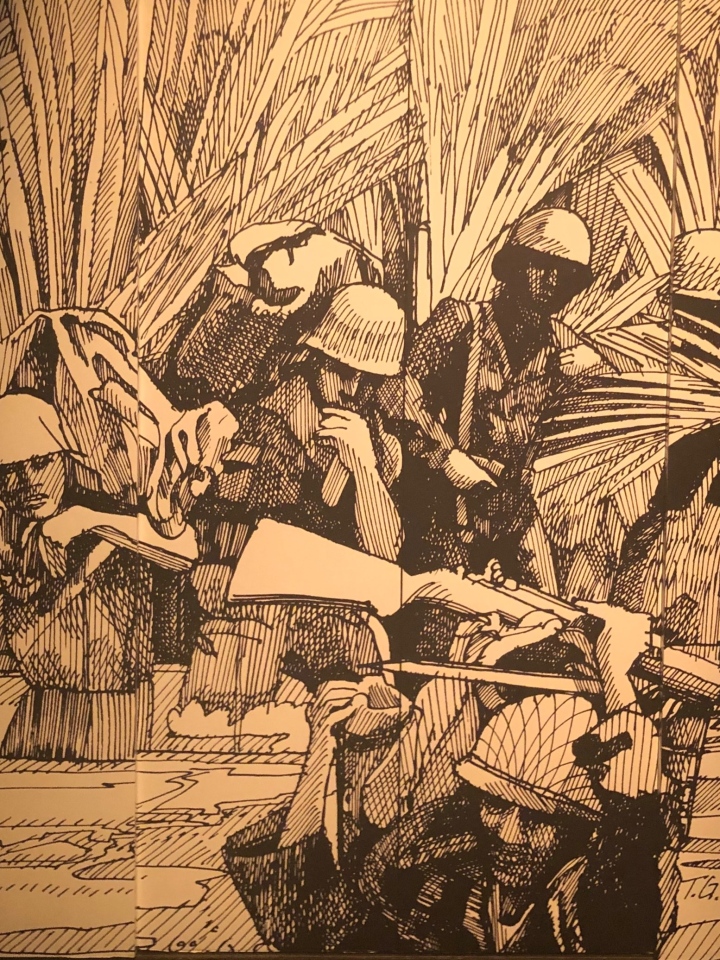 Heinz History Center is usually a fun little romp down memory lane, but this Memorial Day we visited a more somber exhibit – The Vietnam War: 1945-1975.

Developed in partnership with the New York Historical Society, the exhibit explores the years of US involvement in Indochina. The show highlights key players and turning points in the war and explores how it impacted our nation’s trust in government, economics, and popular culture.

That’s me loosely quoting the promotional material about the exhibit. Personally, I found it grim and depressing, like the war itself. My memories of Vietnam are those of a 9-year-old child whose big brother was over there: drawing pictures to include with the care packages of Hellman’s mayonnaise, tuna fish and Jif peanut butter my mom sent him, being shushed every time the news came on, and the Tet Offensive when the area we’d last known him to be in was bombed and no one could locate him. My mother dove for the phone every time it rang. Thank God, my brother made it home. But the fact that thousands of other boys died in a senseless “conflict” breaks my heart.

I went into the exhibit with the intention of sharing some photos and interesting things I learned, but I just couldn’t muster the emotional energy to do so. For those of you who are interested in visiting the exhibit on your own, it continues through September 22, 2019. Museum admission is $18 for adults, $15 for seniors, and $9 for students and children. Active and retired military will receive half-off admission through the dates of the exhibition with free admission offered on Independence Day.

What I did enjoy: the flag folding ceremony

The History Center holds a flag folding ceremony in the museum’s Great Hall three times a year: Memorial Day, Independence Day, and Veterans Day. We were on hand for this moving spectacle in which 50 or so museum visitors helped unfold a 36-foot American flag and held it aloft while a bugler played “Taps” in memory of the men and women who have died while serving in the U.S. military. Tear-inducing for sure, especially when noticing the retired servicemen in the crowd.